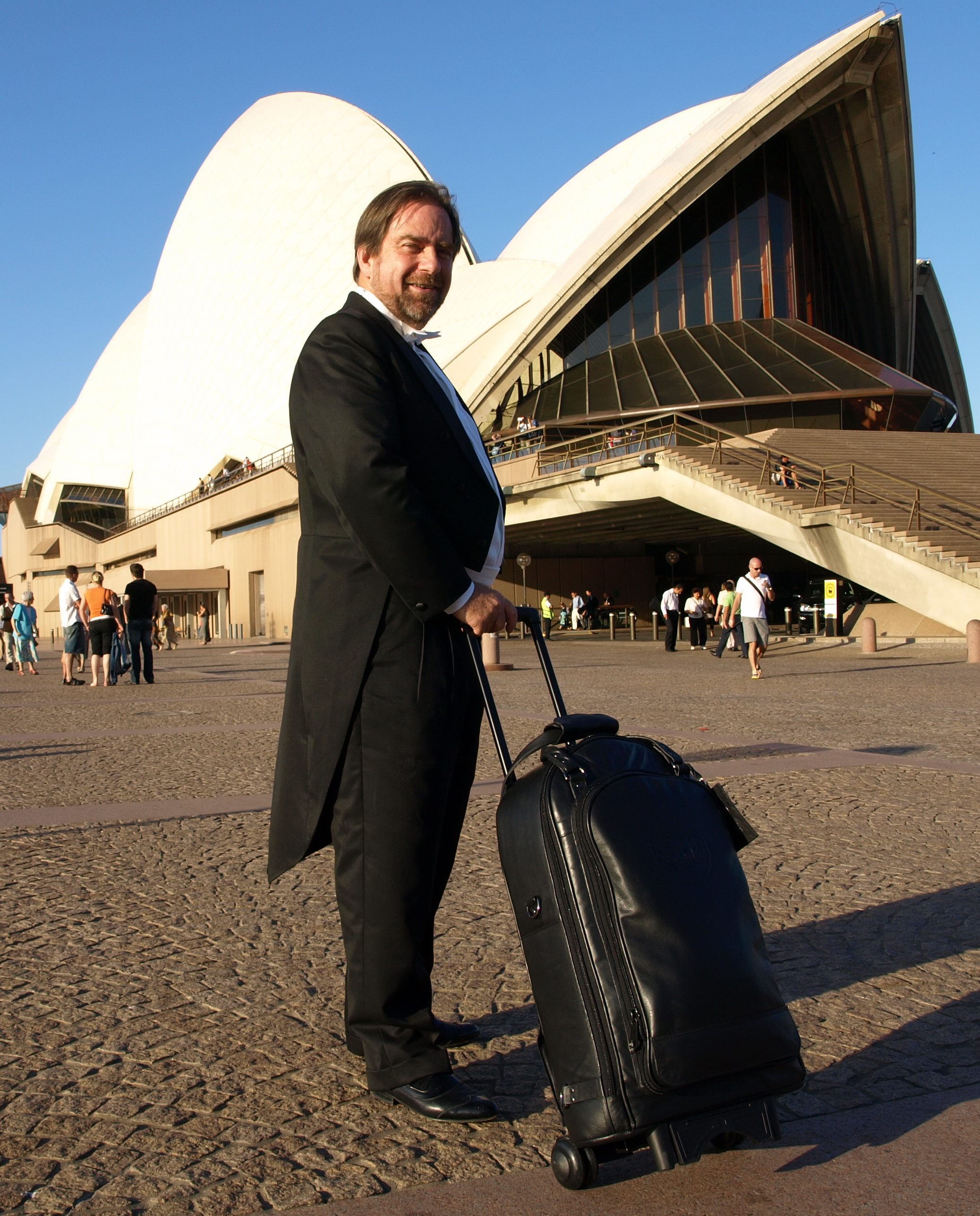 For my purposes, Gard Wheelies fit the bill. Immediately, I was struck by the luxurious leather and the sleek, stylish design. Internally, the Gard embraces my trumpets in rich, thick padding which creates an impression that the bag actually cares for the horns. The flexibility of the wheelie is not confined to the fact that it combines an airline carry-on style wheeled bag, with backpack facility. The infinite internal arrangements make the bag capable of handling any situation. It is truly a bag for all seasons too. The cleverly arranged raincoat, which so unobtrusively hides within the outer lining, can be quickly brought into use to repel  the strongest Sydney storm. The wheelie’s generous wheels are a perfect foil for the cobble stoned forecourt of the Sydney Opera House too. The upright, front loading arrangement, with its smaller footprint is also a great space saver in the Opera Theatre pit. Of all its great features, the wheels are the ones that should sell this great product. Anywhere we play our trumpets, we can experience more stresses and tensions that we would like and it is a great comfort to know that my Gard Wheelie will help take care of at least one of those tensions by eliminating the shoulder and arm strain that can occur when hauling a bag full of trumpets using a handle of shoulder strap. I arrive at work fresher and more relaxed and can concentrate on the task at hand without back pain or shoulder tightness. I thoroughly recommend the Gard Wheelie.

Brian Evans is rare in musical circles, having attained a professional standard as both a trumpeter and lyric tenor. For example, few musicians could boast having performed as solo trumpet and solo tenor in performances of Handel’s Messiah – sometimes in the same performance. Nor would it be common for an orchestral musician to work as both trumpeter and singer for the same company in the same season, but he has done both of these things

Brian began his music study at age 7, and commenced his brass playing in brass bands aged 12. He was solo cornet with the Australian Army Band Sydney, aged only 19, leaving after 12 months to spend the next 14 months with the ABC National Training Orchestra. In 1975, he won the 2nd trumpet chair with the Australian Opera and Ballet Orchestra (A.O.B.O.), which performs at the Sydney Opera House for Opera Australia and the Australian Ballet. During his 36 years(at 2011) with the A.O.B.O. he has performed for extended periods in all chairs in the section, playing most of the standard, major opera and ballet repertoire (over 130 complete works, and over 36 video, DVD, CD and soundtrack recordings). He has working with conductors including: John Pritchard; Mark Elder; Stuart Challender; Richard Bonynge; Sir Charles Mackerras; Phillipe Augin; Richard Hickox; Christopher Hogwood; Willem van Otterloo; Jack Lanchberry; Carlo Felice Cillario; David Wilcox, Simone Young, George Mester, Andrew Litton and MassimoZanetti . His trumpet teachers include Alan Mann; Arthur Stender; John Battersby; Gordon Webb and Daniel Mendelow.

Having time spent with the A.O.B.O., Brian has performed with most major ensembles in Sydney and has also been involved in commercial, jazz and chamber music throughout his career.

AS A LYRIC TENOR

Brian studied voice (high lyric tenor) in Sydney with the late Hector P.Tinkler (some information half way down this link http://www.aussing.com.au) and in Chicago with Professor Norman Gulbrandsen at De Paul University. His vocal experience includes opera, oratorio and concerts in Australia, with Opera Australia; Opera Mode; Contemporary Singers; Sydney Philharmonia; Gosford Philharmonia; and Opera Ensemble and in the United State of America with: Chicago Opera Theatre; Lincoln Opera; The Gilbert and Sullivan Society of Chicago as well as holding the position of Tenor Soloist at Rockefeller Chapel, University of Chicago in 1989/1990. His repertoire ranges widely from the Oratorios of Handel, Bach and Haydn through German lieder and Britten Song Cycles to opera and operetta roles from all eras including Tamino (Magic Flute); Marco (The Gondoliers); The Magician (The Consul) and Male Chorus (The Rape of Lucretia).

Brian maintains a studio of up to two dozen private students, ranging for 6-year-old beginners to post-graduate and comeback players. He has taught trumpet at several of Sydney’s elite private schools and is currently on staff at Wesley Institute.

Brian Evans is the founding and current President of the Australian Trumpet Guild, and Secretary director of the International Trumpet Guild (2007- 2011) and following terms as a director (2001-2007). He is ITG Australia-New Zealand Membership Co-ordinator and Australian news correspondent. He has served as chair of the 2005 ITG Conference Orchestral Excerpts Competition is a regular contributor to the ITG and ATG quarterly journals and has been published in a number of other music journals including the The Brass Herald.
Brian delivered the lecture “The Operatic Trumpeter” at Fort Worth (2003), “A Singer’s approach to Trumpet Playing” at the 2005 ITG conference in Bangkok. (notes available at this link too) and co-presented the Comeback Player session at the 2009 ITG Conference in Harrisburg USA. In 2010 he hosted the 35th Annual ITG Conference in Sydney Australia where along with hosting duties he performed on trumpet, voice and bass guitar!
In 2006, he delivered a master class at the Beijing Central Conservatory and presented his lecture-recital “The trumpet and cornet in Western Opera – An Introduction” at the 2008 China Trumpet Guild Conference in Guangzhou.
He is listed in Das große Buch der Trompete (Schott) by Friedel Keim and is currently working on brass quintet projects with Opera Australia Brass as well as planning a solo CD of trumpet and cornet solos. 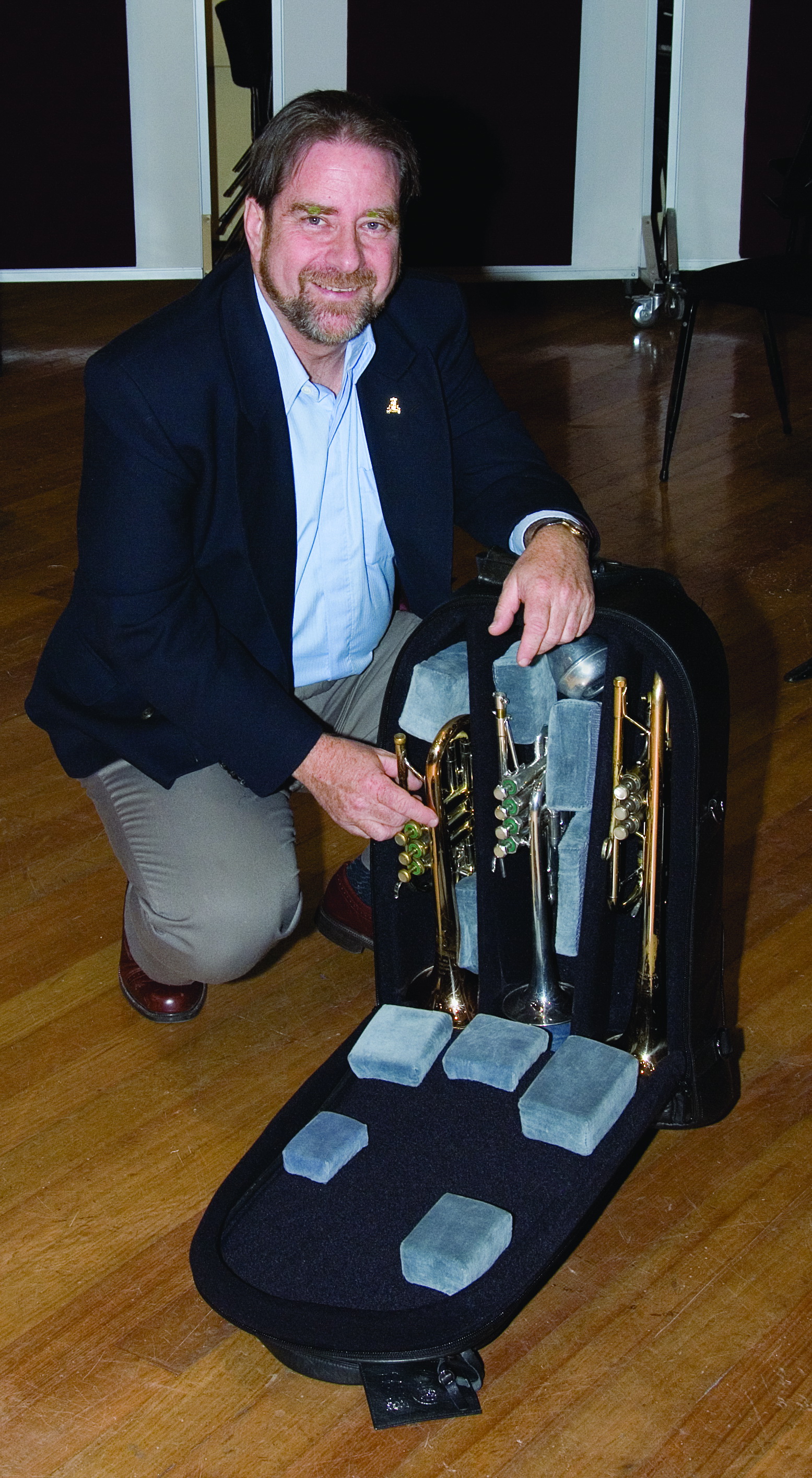 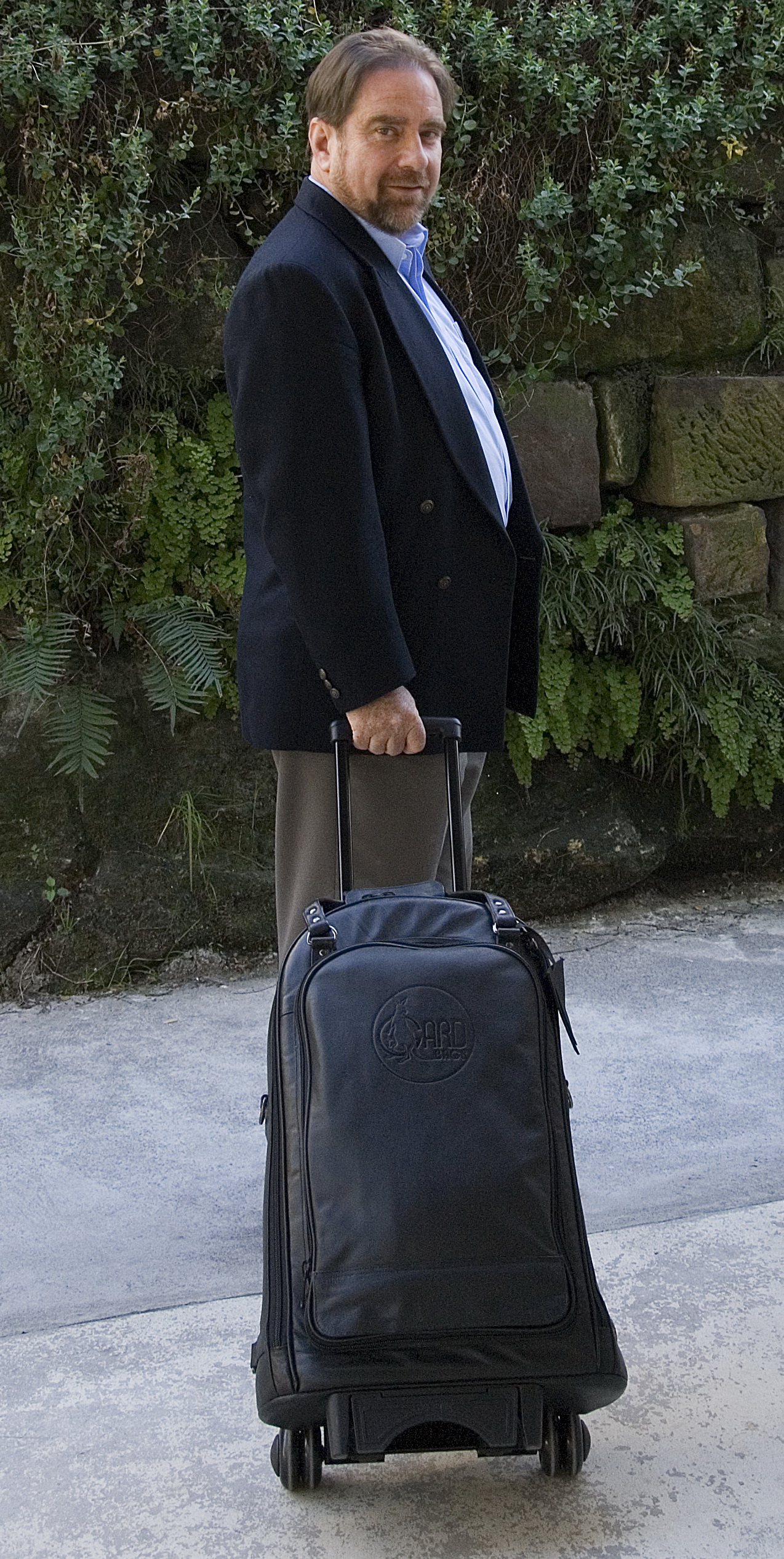